A study from the journal of Bone Marrow Transplantation shows that older multiple myeloma patients who received a transplant of their own stem cells following chemotherapy survived significantly longer than patients who received the standard treatment of chemotherapy alone. Multiple myeloma is a cancer affecting plasma cells, a type of white blood cell which normally produces antibodies. In multiple myeloma, abnormal plasma cells accumulate in the bone marrow and interfere with the production of normal blood cells. Almost two-thirds of patients are over 65 years of age. While there is currently no cure for multiple myeloma, advances in treatment have substantially improved survival, especially in younger patients (under age 65). However, the improvements in survival among older adults have been modest compared with the improvements seen in younger adults.

The preferred treatment for patients under 65 is high-dose chemotherapy combined with autologous stem cell transplant (ASCT). Autologous refers to the transplant of a patient’s own cells. The cells used to treat multiple myeloma are hematopoietic stem cells, a type of stem cell which forms the blood system. The current study looked back at a total of 146 patients who were treated at the Washington University School of Medicine, with a median age of 68 years and an age range of 65 to 77. A group of 62 patients received the combined chemotherapy and ASCT treatment, and 84 patients received chemotherapy only. The group that received the combined treatment survived an average (median) of 56.0 months, while the group receiving only chemotherapy survived an average of 33.1 months. Three years after treatment, the survival rate among the combined treatment group was 78.3%, compared with 49.5% survival among the group that did not receive ASCT. 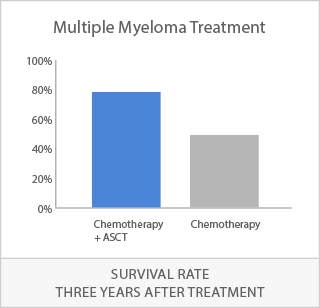 Although the benefits of ASCT are well established in younger adults, its benefits for older adults have not been as clear. In fact, previous trials specifically excluded patients over the age of 65, with a median age of 55 to 57 among patients in the trials. The current study shows that ASCT can provide significant benefits for older patients. Future studies will prospectively enroll greater numbers of patients and track their survival over a period of years to further establish the effectiveness of ASTC in older patients.