More than 1.3 billion people in the world live with some form of vision impairment according to the WHO (World Health Organization). Approximately 80% of these cases are considered avoidable. Scientist may have uncovered a ground-breaking, new method for tackling just such cases.

The anatomy of the human eye

The cornea, the outermost layer of the eye, plays a very important role in our vision. Just like with our skin, several layers of cells (epithelium) covers the cornea acting as a barrier to protect our eyes. So, keeping the epithelium healthy is key to maintaining good vision.

This is the job of a population of stem cells in the periphery called limbal epithelial stem cells (LESCs). When the cornea is damaged, these stem cells divide and migrate towards the damaged site to fix the damage.

But, when an injury affects the stem cells population, it also affects their ability to heal.

Looking at the stem cell niche

Researchers involved in this study hypothesized that they might be able to modify the properties of LESCs (and their ability to heal damaged corneas) by changing the environment around them. And, that is exactly what they tried.

First, they used a microscopy based imaging technique to look at physical properties of the stem cells. They noted that the area where the stem cells are (the stem cell niche) appeared to be much softer than the rest of the tissue.

And, quite amazingly, changing the stiffness of their surroundings affected the ‘stemness’ of the LESCs. When their surrounding tissue became stiffer, these stem cells lost their ability to grow, divide and heal wounds.

So the question was, could they promote healing by making the surrounding softer?

A proof of principle experiment 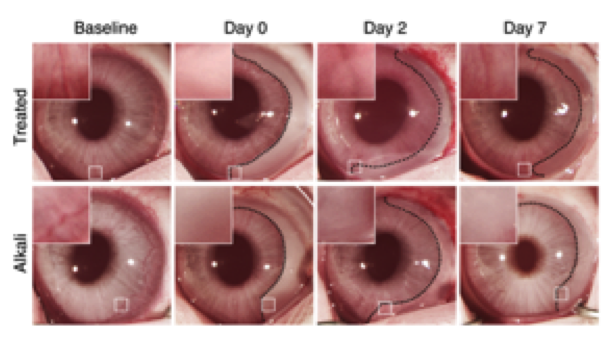 The short answer is yes! Researchers tested their question using rabbit corneas, and noted that injured corneas healed much faster when they were treated with an enzyme that made tissues softer.

What’s even more exciting is that both the FDA and the European Medicine Agency has already approved the tissue-softening enzyme they used (collagenase) for other therapeutic applications. This means that it could be used to prevent eye injuries that results from chemical burns in people, which amounts to about 500, 000 people a year.

This finding has created a lot of excitement, because the researchers are pretty certain the same technique can be extended to other types of corneal injuries that lead to blindness. This means a relatively inexpensive method can be used to help millions of people who are suffering from blindness.

Studies like these stress the importance of preserving stem cells, so scientists can study them. Because the more we learn about stem cells, the closer we get to uncover their true potential, and to tackling conditions that affect many people around the world.